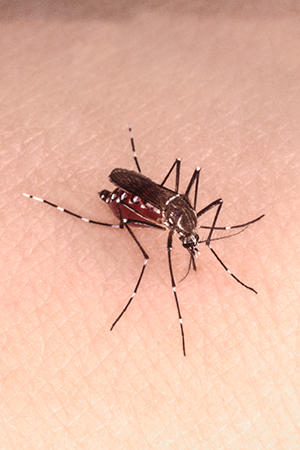 Northern Queensland is a ‘health security hotspot’ for Australia due to its connection via the Torres Strait to islands and countries in the north (Australia’s only international border). The region’s health system is at the front line of disease incursions occurring through the Indo-Papuan corridor into the Torres Strait.

Regional health services respond to both locally acquired tropical infections and those imported from Australia’s near neighbours. The region’s health services manage these threats through a combination of prevention, surveillance and response measures.

TAAHC researchers are investigating diagnostics, vaccines, therapies and treatment protocols for tropical infections important to our regional neighbours. They are also working to enhance surveillance and implementation research capability in the region.

Examples of TAAHC’s work in this area include:

Professor Scott Ritchie (James Cook University) and the public health entomology team was part of the successful Eliminate Dengue program (now known as the World Mosquito Program) in northern Queensland. This novel program, funded by the Bill & Melinda Gates Foundation, introduced the Wolbachia bacteria into the mosquito Aedes aegypti, the mosquito species responsible for the transmission of dengue and Zika. This rendered these mosquitos unable to transmit dengue and other virus. The first open field releases occurred in Cairns in 2011, where the Australian Institute of Tropical Health and Medicine’s Mosquito Research Facility was responsible for rearing the Wolbachia¬- infected mosquitoes. As a result of this work, the Wolbachia bacteria is established in Aedes aegypti mosquitoes in almost all urban areas of Queensland from Townsville north and dengue activity is now at its lowest level in 30 years.

The WMP is continuing its work with the Dengue Safe Project Ingham, a partnership with Townsville HHS and Hinchinbrook Shire Council to release Wolbachia carrying mosquitoes in the Ingham area.